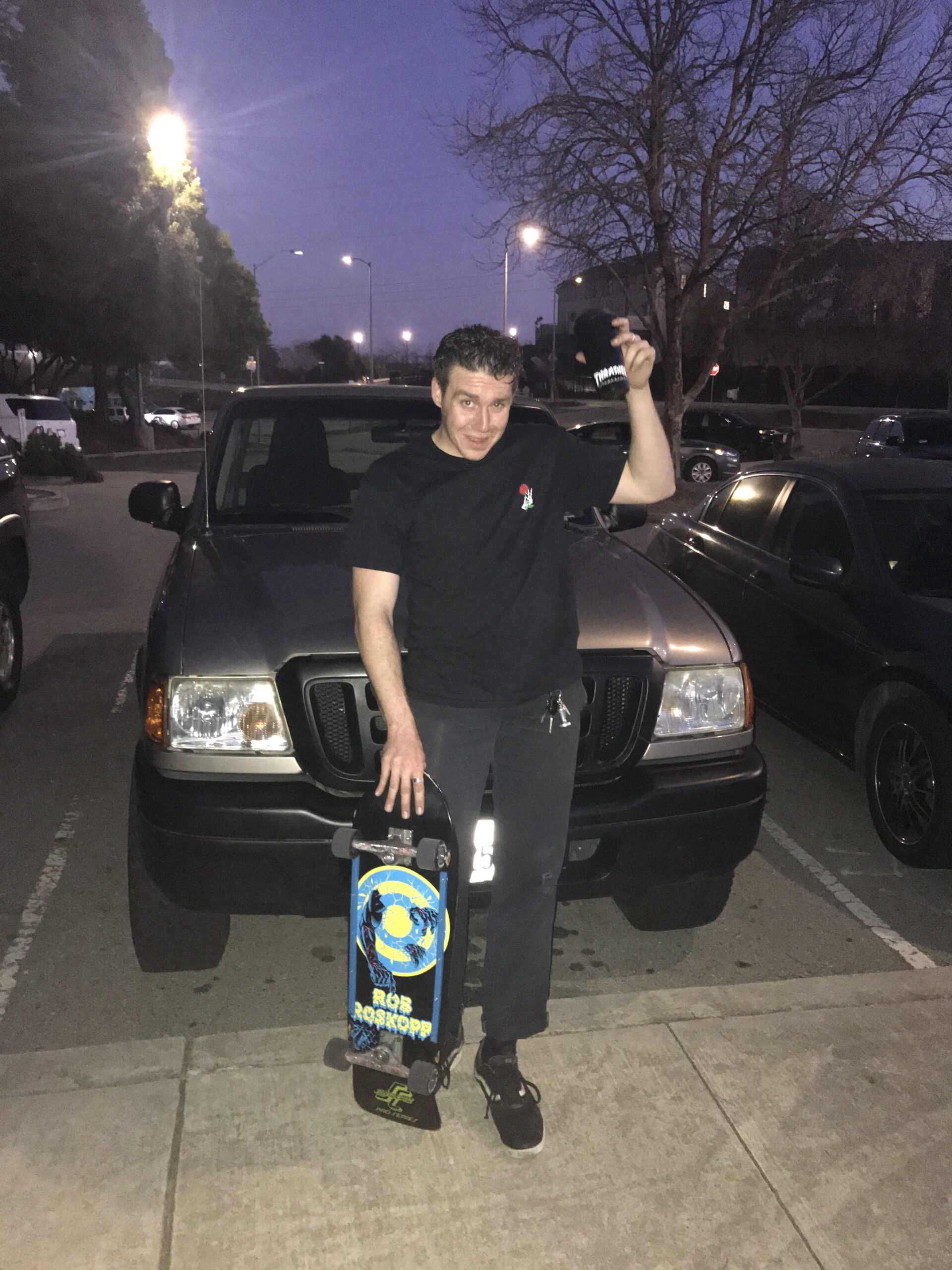 At the end of 2019 I was feeling a bit aimless. Each passing day felt nearly indistinguishable from the last, and in all honesty, I was content with that. But that stale, unimaginative feeling made me scared. I wanted to try to pump some ‘artificial’ growth into my day-to-day, so even if every day felt the same there was a record of growth I could reflect on.

So, I started skating a curb every day. Sometimes it was a parking block, or a random piece of concrete, whatever. I have never been the most talented skater (still haven’t learned the elusive kickflip) so a curb was an achievable goal every day. There’s endless room for creativity on and over a curb, and I loved the idea of being out in the streets every night.

I learned a lot skating a curb every day. It completely changed my relationship with skateboarding as a whole, and as much as I hate to say it, I love those god damn curbs. So here’s some reflections on the whole year long process.

That’s one of the things about skating, its as much the act of skating as it is the discovery of what you’re all about and checking out the world… it’s not just the thing that happens the top of the stairs and the bottom of the stairs or one side of the ramp to the other, its all of this too.

One of the absolute hardest parts of #curboftheday for me was being limited to 15 second consecutive Instagram stories. Skateboarding has always been more about what happens between the spots you go to rather than the actual tricks you can do at the spots or even the spots themselves (especially when you can only do like 5 tricks). There were days I’d open the door and skate for miles around the city with my backpack and a tripod and only have a 5 second clip of one single curb to show for it. And that makes me sad. I’d meet the raddest people who were stoked on what I was doing, or people who fucking hated me and kicked me out of spots, people chasing me with their cars, random skaters showing me tricks, so much that was impossible to share.

There was like a month period in Watsonville where no matter what curb I skated or what time of night, a grown ass man on a razor scooter with the handlebars all the way down would come flying out of fucking nowhere, literally pushing as fast as he could, and then disappear again. A month of that! And I could never share that with you all. I came to terms with it eventually by understanding the simple curb tricks were more of a microcosm for my skating as whole each day. And often the way that I skated reflected the emotions the environment made me feel that day, a quick panicky trick or settling in comfortably trying something hard. But there is still so much I experienced I feel belonged in the #curboftheday meta that just couldn’t fit.

The whole is greater than the sum of its parts.

There is no way I can sit here and type this without saying that I half assed a lot of days. It bums me out but it is just the nature of skating every single day. I got injured so many times (thankfully nothing serious), I was tired, it was raining, some days I just flat out had no interest in skating. But that’s okay. The goal was not to skate for 4 hours every day and learn a new trick, the goal was to just simply skate a curb every day. Skateboarding is finnicky in that there isn’t guaranteed linear growth. It doesn’t owe you anything, and you’ll pay your dues to it over and over again. There were days I felt like I couldn’t even ollie anymore. Simply skating a curb is no great triumph, in fact I think anyone can do it. But skating a curb every day for a year, the totality of that and the amount of time and energy spent to complete it, that is a huge triumph to me.

Honestly, I am excited to skate this year on a regular but not daily basis. It gives me the opportunity to be passionate about the act of skating again, to have longer sessions knowing I am probably not going to skate the next day. I feel much more comfortable on my board and clear on my abilities (or lack thereof) and with that I am confident my skating will be better this year.

There was a bizarre dichotomy between my insecurity about the way I looked skating and my obsession with over analyzing every single clip I posted. My arms flail around like a wacky inflatable tube man, my clothes never fit the way I want, none of my tricks look as good as they feel, and yet I had to post a 15 second video of myself every single day. Really imagine that, filming yourself every day and posting it for like a hundred people to look at. Who really feels so confident in themselves and their appearance they can post like that every single day and feel good about it? Early on there were clips I’d get, post, delete, and do another one of because I hated the way I looked.

It’s a gross feeling but because of that self-doubt and humility I came to watch my own clips over and over again. And that felt gross too, like I was way too into myself watching myself. Excessively interested in the way that I looked and the package that I was showing off to social media. I’d have fake arguments with myself coming up with what someone might reply if they saw the clip and thought my trick sucked or my shirt was too big or whatever stupid shit. That level of obsession was not healthy for me, but I think I had to go through both the insecurity and the self-indulgence to understand how social media works for me. The battle between these two was probably the hardest part of skating every day.

I couldn’t have done it without you.

For all the faults of social media, accountability is a huge part of it. I didn’t think anyone would care about me falling on my ass once a day, but I knew if I didn’t post it somewhere I would never commit to it. And man, a lot of people really cared. To everyone that watched the Instagram stories, who replied laughing or cheering me on, or asking why I didn’t post that day when I got sloppy, I cannot thank you enough. To everyone that skated with me, filmed me, hung out in the freezing cold behind a jack in the box while I fell into puddles of piss, thank you. At times this journey felt profoundly lonely but knowing all of you were watching and having my friends and family participate all made this feel like a big party everyone was invited to.

If you ask me if I would do it again, I really don’t know if I would answer yes. I’m so thankful I did it, and I’m so happy its over. This year I have a new challenge, which this post is the first of. I’ll be sharing some sort of written musings with you all weekly. So again, thank you all for your support this last year. Thus concludes #curboftheday 2020.

4 WAYS TO STEP UP YOUR COFFEE GAME AT HOME

A QUICK GUIDE TO TO BREWING BETTER TASTING COFFEE, MORE CONSISTENTLY.   Preface Before we…

The Man who Souled the Coffee World: Hermann Sielcken and Brazilian Valorization

I’ve spent a tremendous amount of time experimenting with manual brew methods. In the first…